Ubuntu comes with an old version of Node.js and it’s a pain in the ass to update and make it use the updated version. Node version manager (nvm) worked for me.

Install one of the versions, e.g.:

Eagle is self-contained to a folder when you download and unpack, which is convenient for some things. But mostly not. I want to be able to open it like any other program.

Unpack the downloaded tar.gz file to ~/.local/share/Eagle/. You should now have a subfolder named something like eagle-<version>/

Create a file called eagle.desktop in ~/.local/share/applications/ containing the following:

Where <version> is the Eagle version number (like 8.6.3) and <username> is your username. If you’re using a theme that has an icon for Eagle, you can replace the Icon value with the name given to that icon. (For example, with the Papirus icons, just make this Icon=eagle.)

Whenever you get a new version of Eagle, you’ll have to update the version number in this .desktop file to point to the right location.

JetBrains makes nice IDEs for a bunch of languages (for us mere mortals who don’t use vim or emacs). But they don’t make installing on Linux super easy. Here’s how I do it.

If you’re installing an update, follow the same steps. Creating a new desktop entry should overwrite the old one, but probably differs by distro need to restart your session for it to take effect. (For me in Gnome, that’s Alt+F2, then r). Also note that if you have a user-specific desktop entry, that will take precedence over a system-wide one.

By default, the created desktop file will use the icon in the installation folder. That means it will probably ignore an icon set by a theme (if you’re using one). You’ll have to do this after you create a new desktop file from updates as well.

Sometimes Matlab decides that the figure you’re trying to export is too complicated for proper SVG exporting. When you go to export the figure with saveas, it creates an SVG with embedded images instead of vector graphics. (This is all in Matlab 2014b and later, with its new graphics system.) After digging through Google results and documentation, there is a solution to force it to export as a vector image (from the saveas documentation):

Set the renderer for your figure to 'painter':

Then save the figure as normal:

And you’ll have a proper vector plot.

Sometimes it’s useful to be able to actually see the files that you are accessing remotely. So, instead of just using ssh in the command line, it’s useful to have a GUI. Instead of installing extra programs, though, you can just do it directly from within your file browser in Linux.

In the Nautilus file manager just enter into the location bar (you might have to hit Ctrl+L to edit it):

Or whatever your preferred accessing method is (ssh, stfp, ftp). (Also useful to remember: the change the location bar from buttons to a text field, hit Ctrl+L.)

The remote directory is then mounted and appears on the left side bar. It will stay mounted even if you close Nautilus, and you just have to click on it to re-open it. To unmount, just click the arrow next to it in the panel (like unmounting/ejecting a drive/disk).

Someone made a program that lets you add themes and extensions to Spotify. The Linux version only has a command line version, hence Spicetify CLI.

There’s a whole repository of community-created themes for Spicetify

There are also Spicetify extensions, but I haven’t tried any of those yet.

Within the Solaar GUI, select the mouse (I’m using the MX Master 3) and click the “Rule Editor” button. In the “User-defined rules” section, right click and select “Insert new rule.”

From here, I created a sub-rule for each gesture direction. Right click on “[empty]” within the Rule and select “Insert here” > “Sub-rule.”

Right click on “[empty]” within the Sub-rule and select “Insert here” > “Condition” > “Mouse Gesture.” At the bottom of the window, begin typing the direction of the gesture, and it should autocomplete – for example “Mouse Up.” That’s all you need for the condition.

Now right click the “Mouse Gesture” condition and select “Insert below” > “Action” > “Key press.” At the bottom of the window, start typing the relevant key you want it to execute. You can also use “Add key” to add additional keys to the key combo you want to execute. For example I have “Super” + “W” set to move up a workspace.

Here’s what my configuration looks like for four gesture directions, plus reassigning the button underneath the scroll wheel. 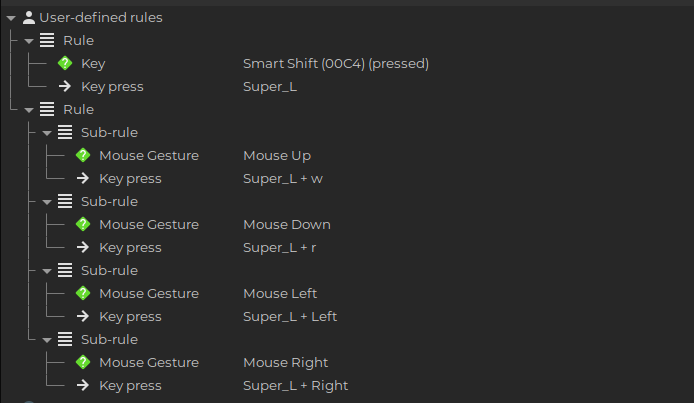 3MF is a compressed archive file format that (by default) Linux won’t distinguish from files like zip and tarball files. So if you just change 3MF files to open with PrusaSlicer, it will also change the default program for those others. To fix this, we need to tell get Linux to distinguish them with a new MIME type.

Now, you should be able to right click a 3MF file and set the default application to PrusaSlicer.

Note: The original instructions suggest adding the following line to ~/.config/mimeapps.list: [Added Associations] section: application/x-3mf=prusa-slicer.desktop. However, this doesn’t seem to work when the .desktop file using AppImageLauncher, so I find it easier to right click and set the default manually.